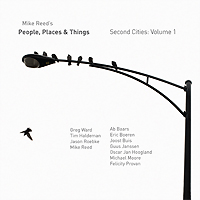 Drummer Mike Reed started People, Places & Things as a vehicle to explore undersung repertoire from Chicago’s jazz, blues and improvised music scene between 1954 and 1960.  In short order, they produced a highly acclaimed trilogy, each with a different take on the concept, and eventually sharing the spotlight with players from that original scene. They have continued forward from there.

On Second Cities: Volume 1, their fifth release, they move to a new place, with some new people.  The second city is Amsterdam, where the album was recorded, and the roster includes members of that city’s celebrated improvised-music community.

Reed has family in the Netherlands, “and I was lucky enough to spend a great deal of my youth there,” he writes in the liner notes.

“As my musical tastes began to mature I was quite drawn to the sounds of improvisers based in Amsterdam; of course Misha, Han, ICP, Willem Breuker, Sean Bergin’s MOB and on and on. I remember especially having my concepts of improvising, composing and swing completely changed after seeing an Available Jelly show.

“Then: Over the years of organizing concerts in Chicago I was able to present many of these amazing musicians who would soon turn into friends and colleagues, especially as my travels took me to back to Amsterdam as a musician.”

While sorting through sheet music from these various shows, it occurred to Reed to have PP&T cover some of these tunes at an upcoming gig in Chicago. “It turned out to be so much fun that I furthered the idea to the prospect of recording these compositions with the composers, and basically having PP&T be the ‘house band’.”

“It’s the group’s most diverse record to date,” writes Bill Meyer, in the Chicago Reader, “reaching beyond muscular bop and pensive, bluesy balladry into totally free improvisation -and it also includes a pair of joyous South African kwela-style romps by the late Sean Bergin.”

"They have never sounded more ebullient... like a couple of Labradors charging around a muddy field... just the sort of process jazz needs in order to persist as a living thing." — Bill Meyer, The Wire

"Following Reed’s trilogy of albums working the music of Chicago’s jazz and blues improv past, he’s now moved on to another city… Amsterdam. More free in nature than past recordings, but still with a sound that traces roots to the past… an album that has more kick, loads up more on left hooks. Joining Reed are Greg Ward on alto sax, Tim Haldeman on tenor sax, Jason Roebke on bass, Ab Baars on tenor sax & clarinet, Eric Boeren on cornet, Joost Buis on trombone, Guus Janssen on piano, Oscar Jan Hoogland on piano, Michael Moore on alto sax & clarinet, and Felicity Provan on trumpet. Recommended." — Dave Sumner, eMusic

"It is not so easy to get me up and dancing in my kitchen where my computer is but these songs certainly did the trick.." — Bruce Gallanter, Downtown Music Gallery